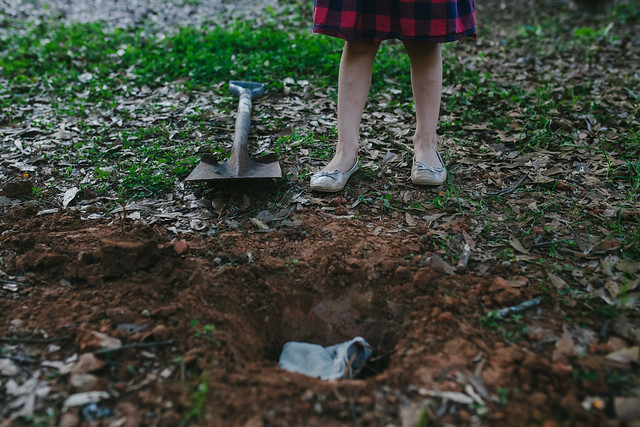 My favorite children’s book is The Dead Bird by Margaret Wise Brown. A friend of mine gave me a copy knowing I would love the illustrations by Remy Charlip. The story is about a group of children who stumble upon a dead bird and provide a sweet and sacred burial service for it. Charlotte recently stumbled upon it on the bookshelf, remembering we had read it after Mrs. Lebronski (the bunny at James’ parents’ farm) tragically died, so we read it not so long ago.

James had taken the girls to run an errand, and when they returned they told me about a dead baby bird they found in our front yard. We talked about how it had most likely died from falling out of the nest without being able to fly. A little while later, we went out to bury it. Chuck got a washcloth to wrap the bird in and a shovel from the backyard. She tried digging the hole in several different places in the yard, but the ground was too hard. Eventually, she settled on some help from me. We buried the bird and said some nice things about how we love having birds in our neighborhood. Charlotte filled in the grave and started looking around for some things to mark the burial site. When she couldn’t find anything to her liking in the front yard, she went searching in the back yard. Five minutes later she came back with a sign and post James must have made her with scrap wood in his shop. She set out to write “Bird” on it with a pencil. I told her she should paint it so you could see the words. She did not want to paint it, so she used markers instead. After the sign went in the ground, Charlotte gathered leaves, flowers, and herbs and carefully placed them on the grave while singing a song for the bird. After dinner, she wanted to go back out and sing a song to the bird, she titled it, “We Can Tell you how you died.”

We can tell you how you died, dead bird.

You falled off the tree, you couldn’t fly.

Then you hurt yourself, but we buried you.

We put everything around, plants and stuff around.

We put a sign up, and we put hearts on it. 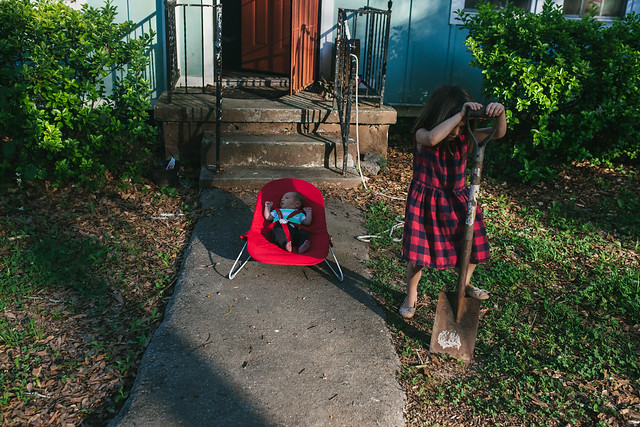 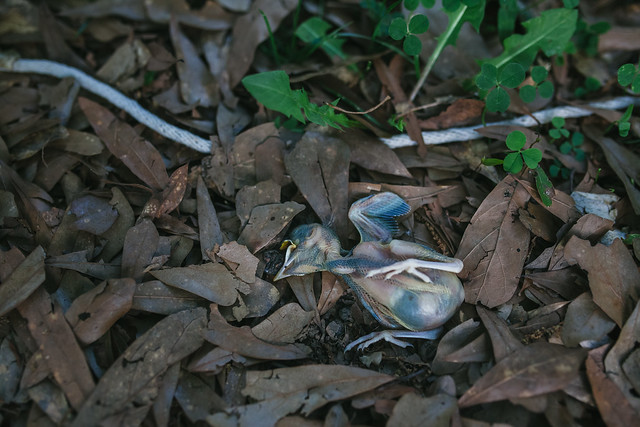 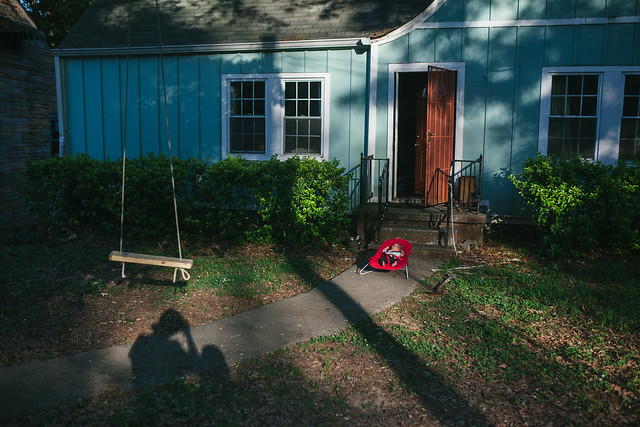 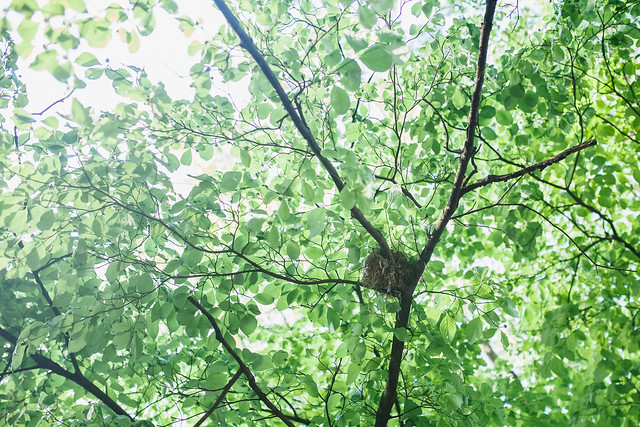 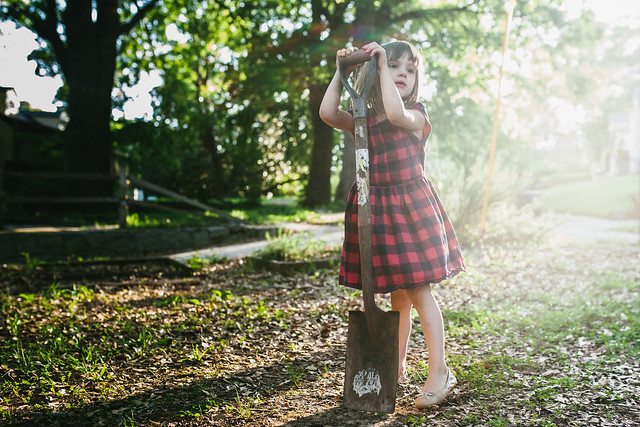 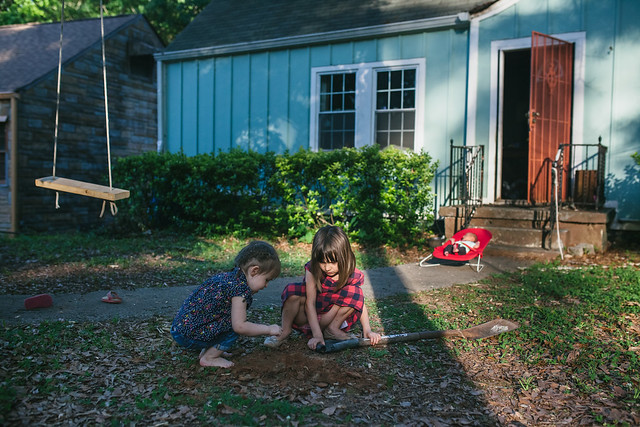 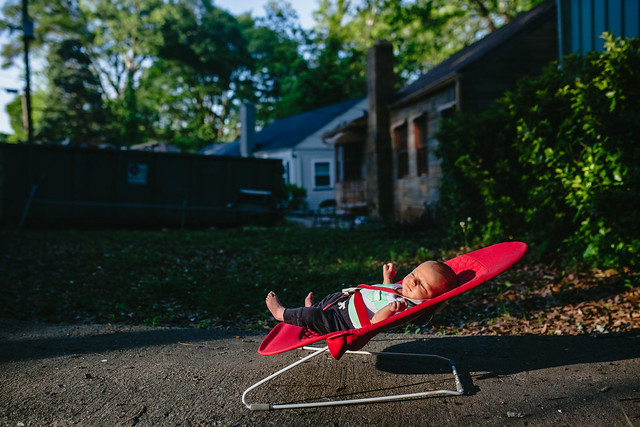 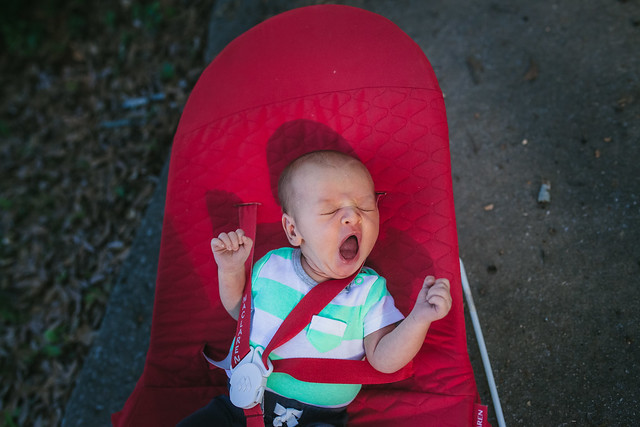 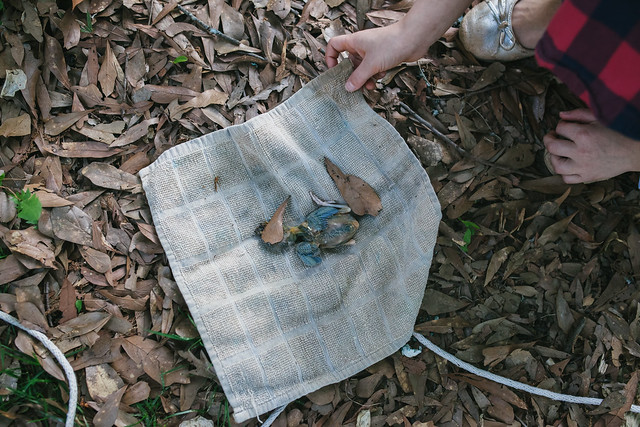 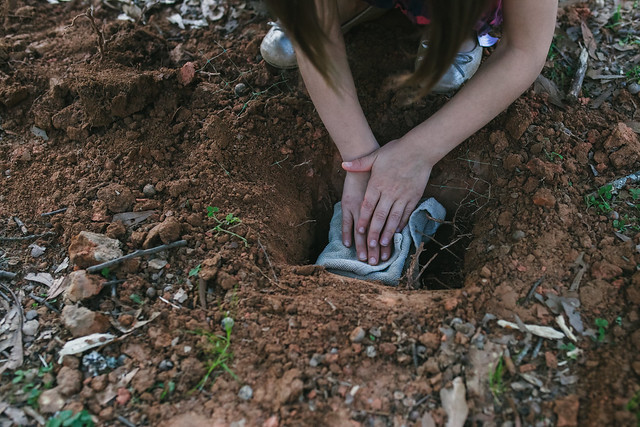 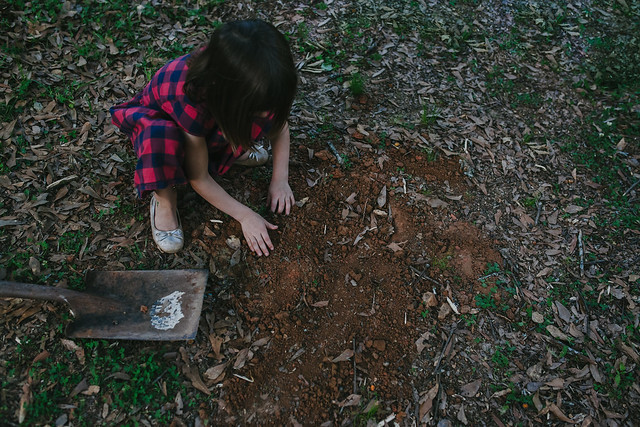 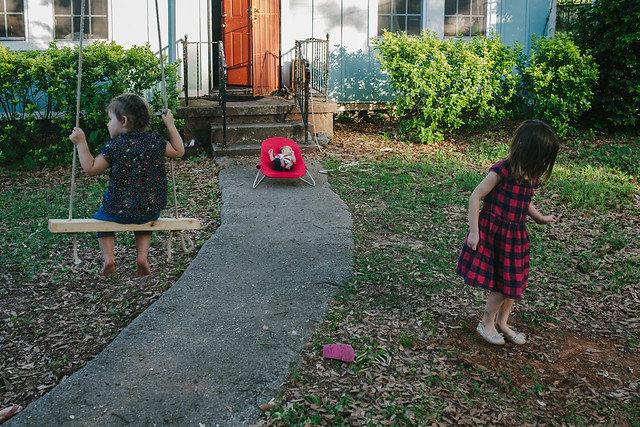 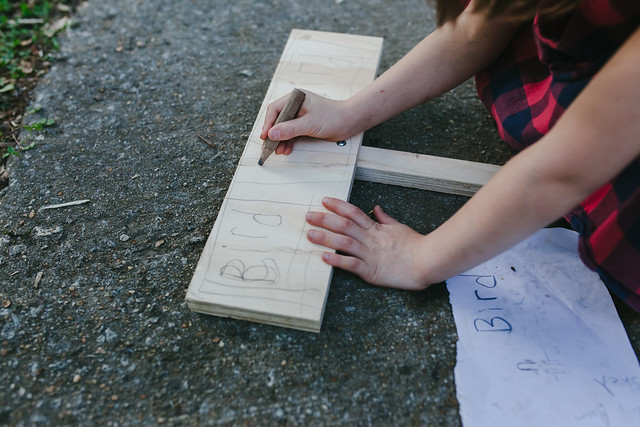 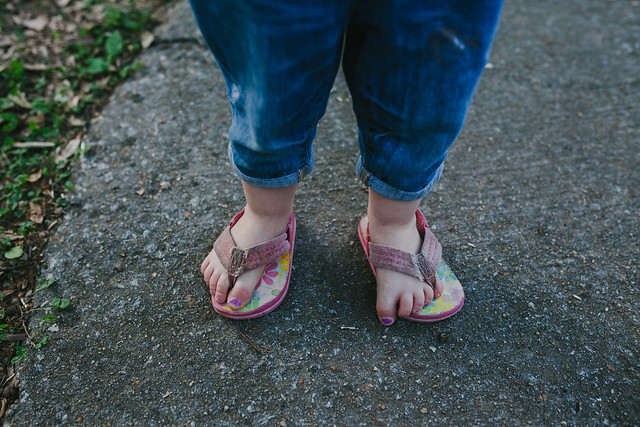 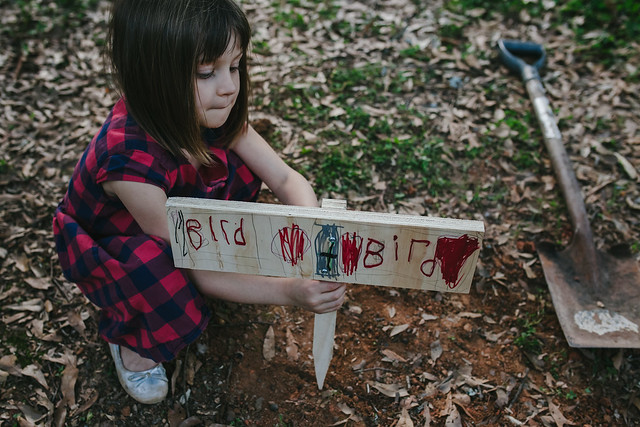 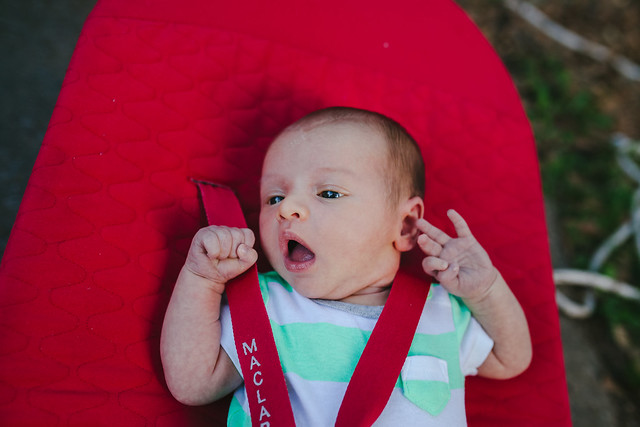 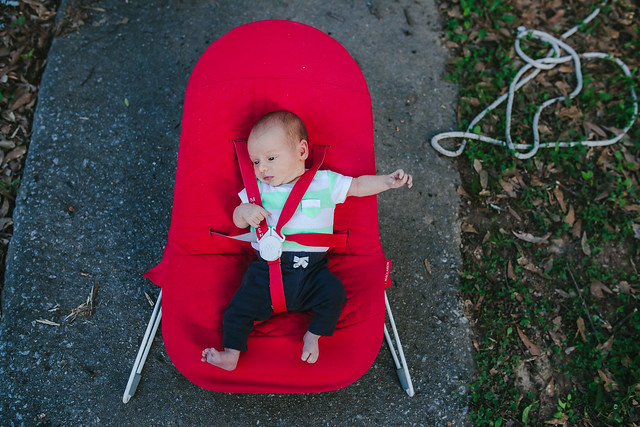 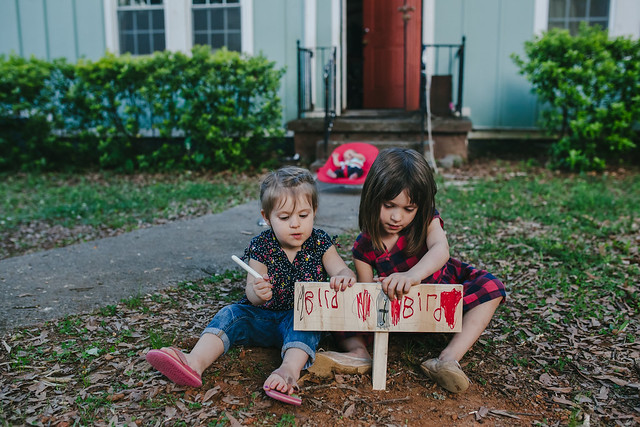 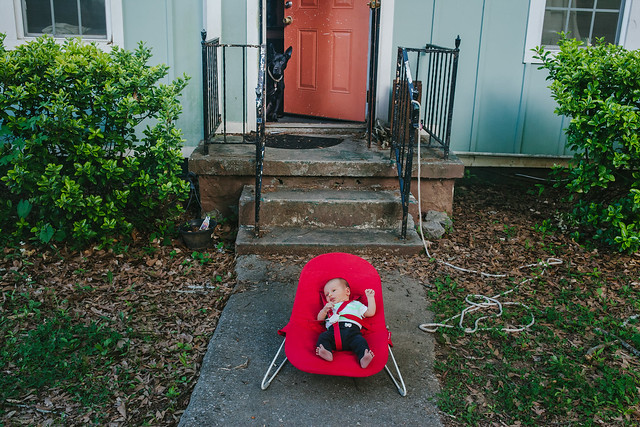 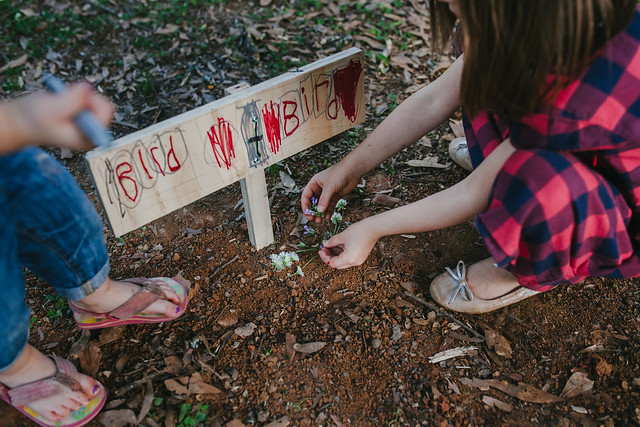 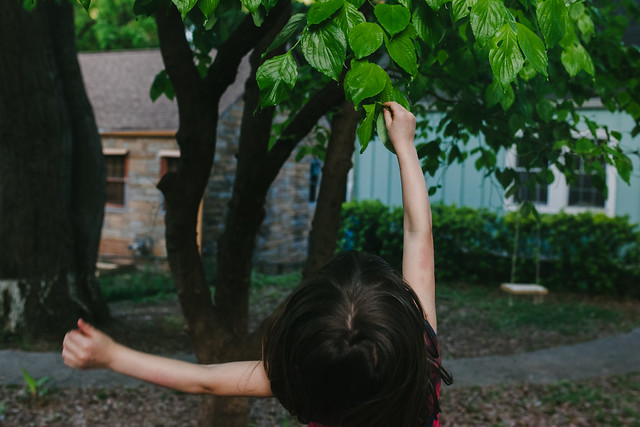 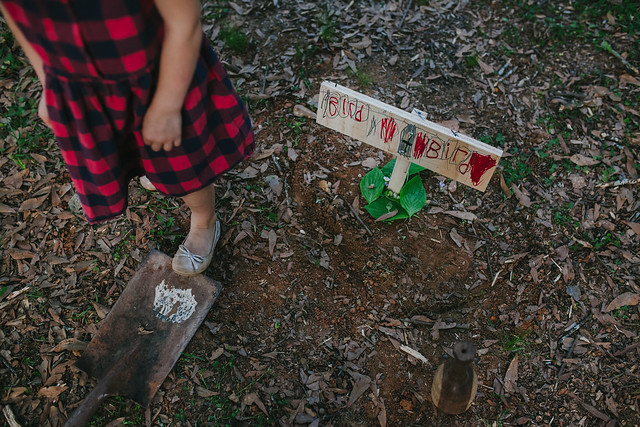