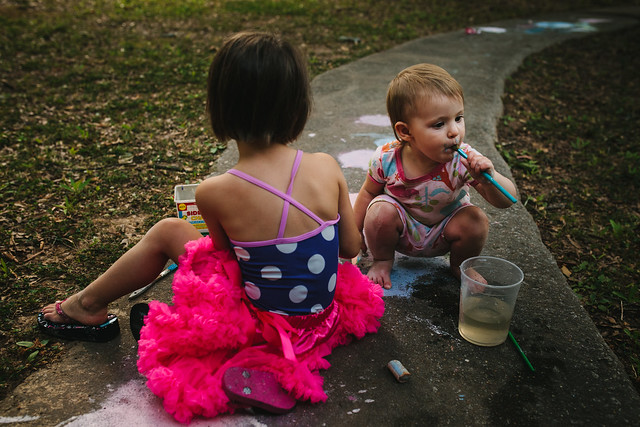 When we woke up and looked at the clock, it was 10 am. All four of us, on a queen bed, in the one part of our house that is currently air conditioned. Usually Winnie is getting ready for her first nap at this time. I knew we were all exhausted, but still. The day progressed with lazy attempts of productivity that were unraveled by two girls needing some major attention from me. They have spent the last several weeks sharing me all day every day with other kids, and it seems it has started taking a toll on them as they spent a good part of the day fighting over the physical space on my body. It was sort of cute watching them negotiate parts of me (seriously, you should see Winnie trying to shove Charlotte out of the way), but did I mention our AC is busted, and it happened to be 99 degrees that day? I love to be warm and honestly don’t mind the heat inside, but I do notice my patience, particularly with issues of personal space, seems to melt in the heat. I believe I threatened to throw them out the window, which was a terrible thing to say cause, well, obviously, but also because Charlotte is in this very literal phase and needed a lot of reassurance that I was just kidding. Also, now I will cringe each time she uses that phrase on someone else (most likely me). Later in the day, I may have locked myself in the attic for a minute. I feel bad cause at the end of the week, I kind of want nothing to do with all kids just as my own kids are really wanting me to themselves. Balancing needs, setting boundaries, it’s all work, and I’m tired and sweating while sitting. I would later find out that sickness was contributing to the increased clinginess. Yes, I should have had more patience.

After leaving the house to cool down with the pool and some ice cream, we came back home, and Chuck got out the sidewalk chalk that we had used this week. We’ve added some spray chalk to the mix, but still the preferred method for sidewalk chalk is to color with it, and then paint over it with water. Chuck always leans towards experimentation, abstraction, and imagination in her play. Even in the absence of pictures or words, there are always stories. I was too preoccupied with trying to keep Winnie from putting the paintbrush in the water and sucking on it though to be able to hear what Charlotte was thinking or narrating as she worked. After I took the paintbrush away, Winnie picked up the container of chalky water and tried to drink straight from it, so the water got put away as well. The giant rainbow sprinkle ice cream cone that Charlotte had just had seemed to hit her system all of a sudden, and she got up to run and spin around. She started jumping off the retaining wall and then running up and down the driveway over and over. She eventually got distracted from her running when she spotted a few lightening bugs and went off to catch them while I went inside to put Winnie to sleep. Summer nights are my favorite. 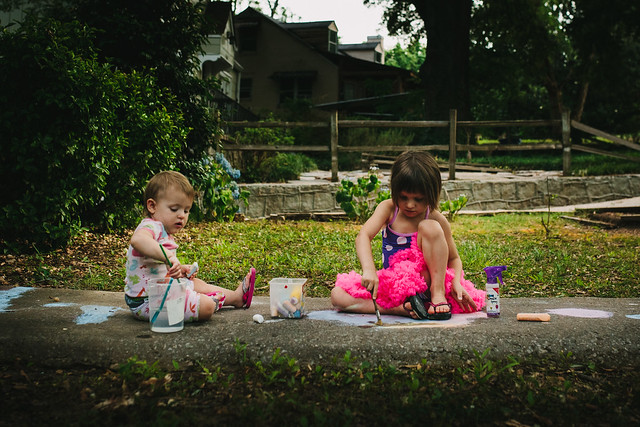 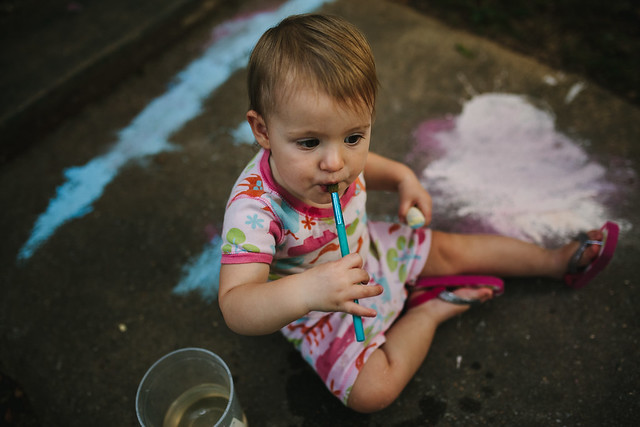 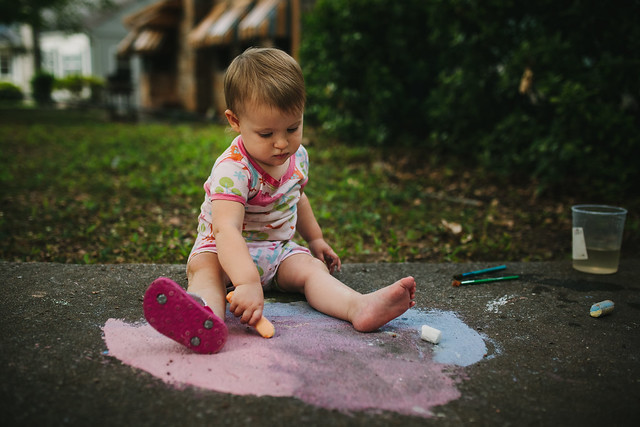 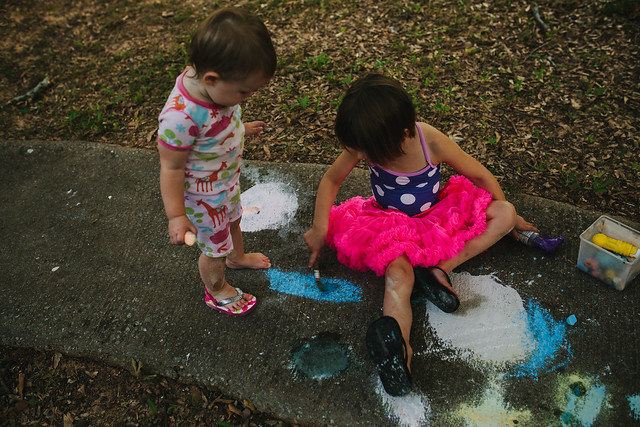 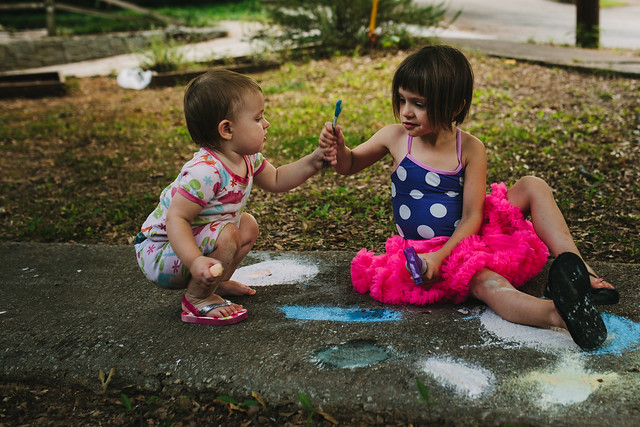 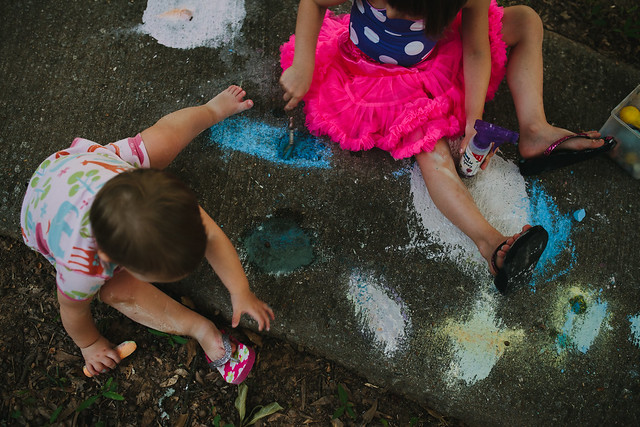 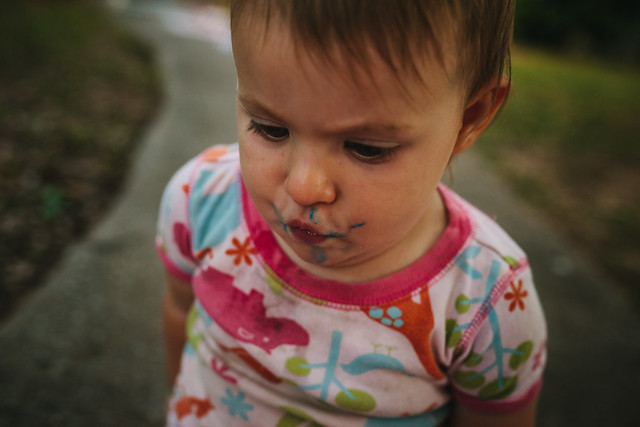 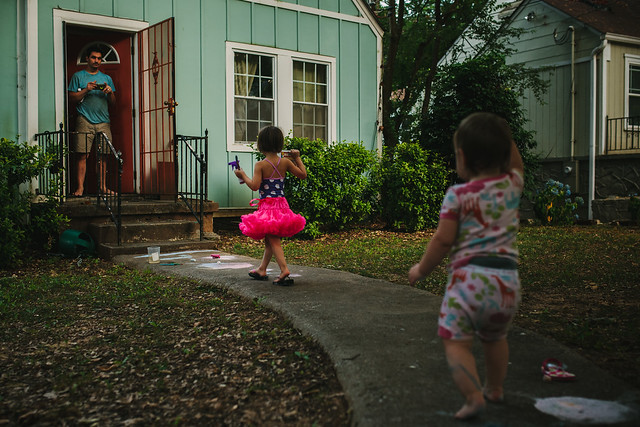 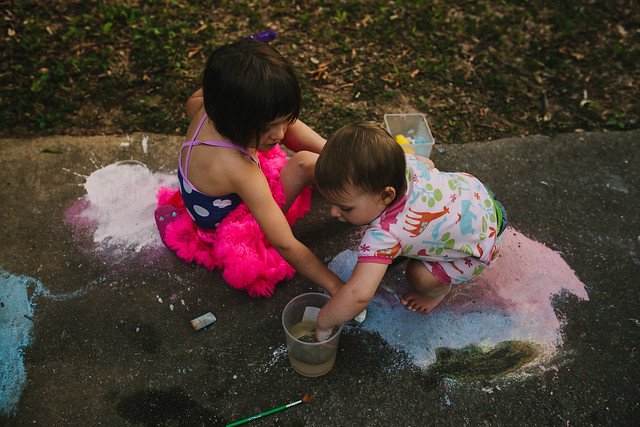 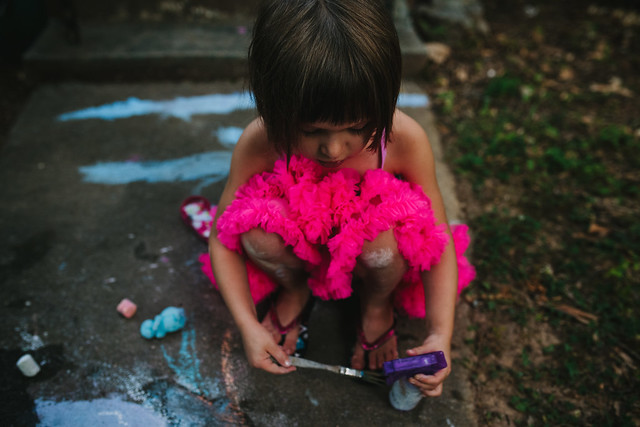 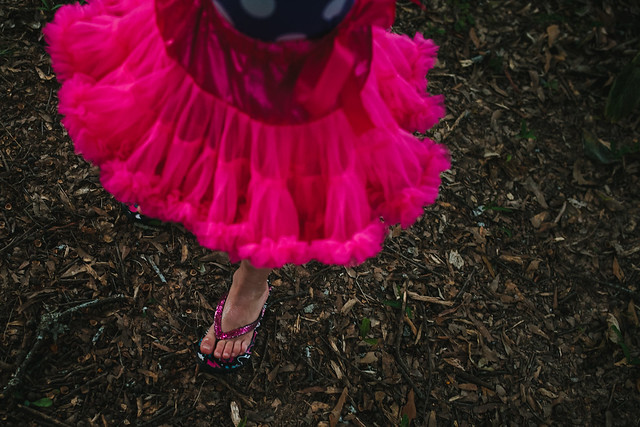 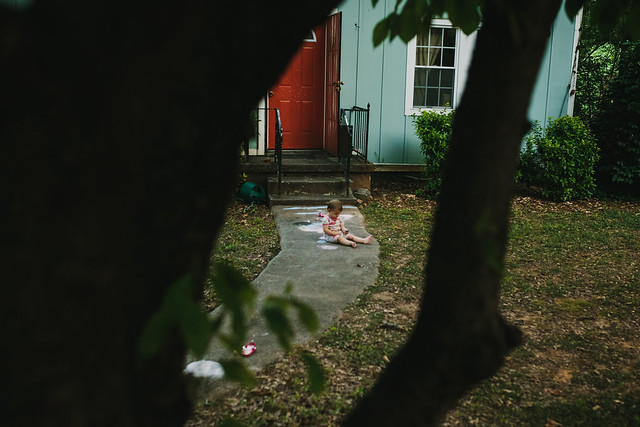 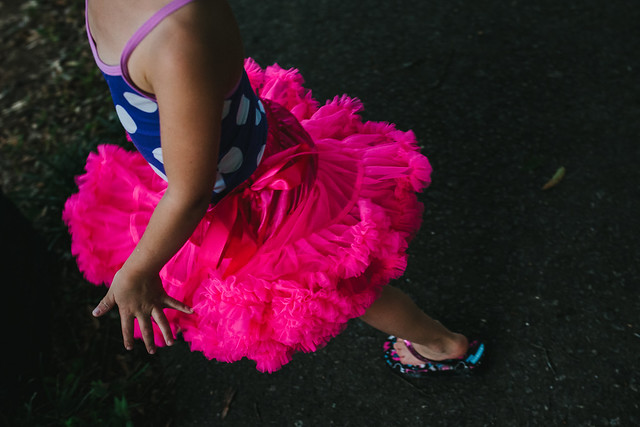 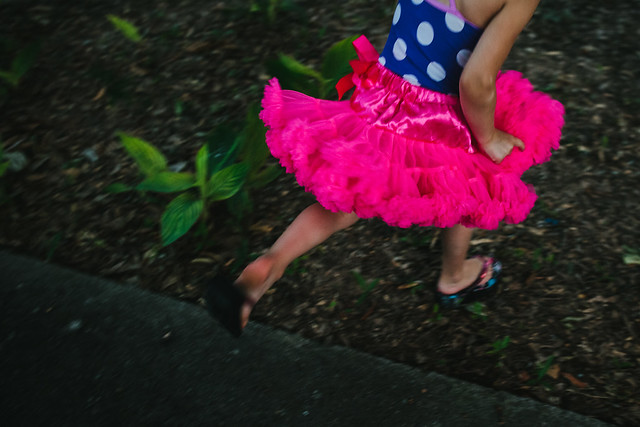 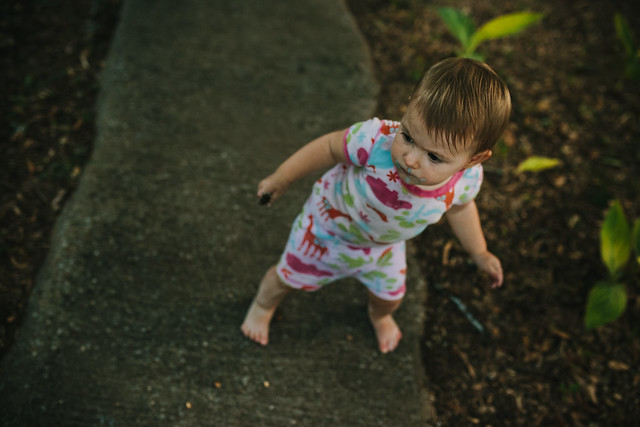 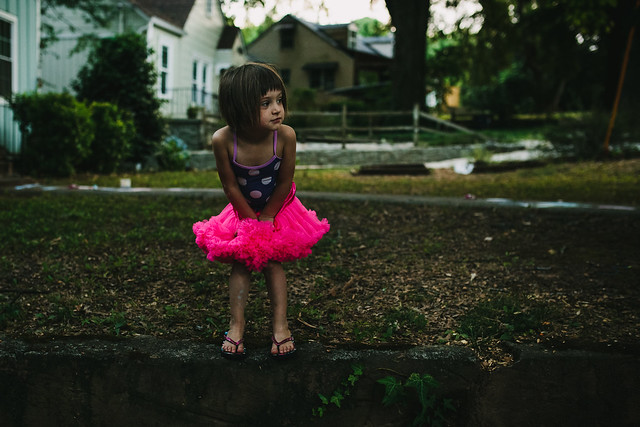 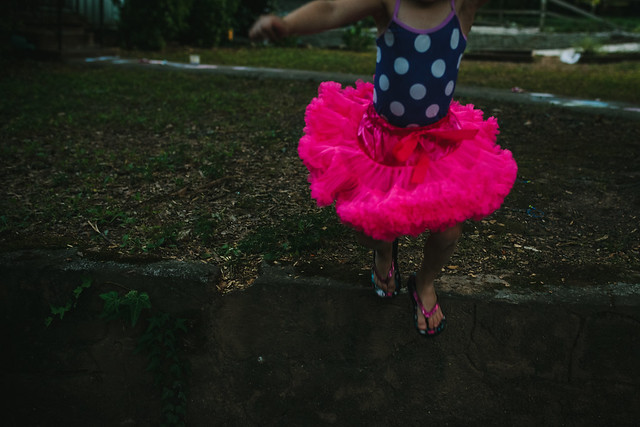 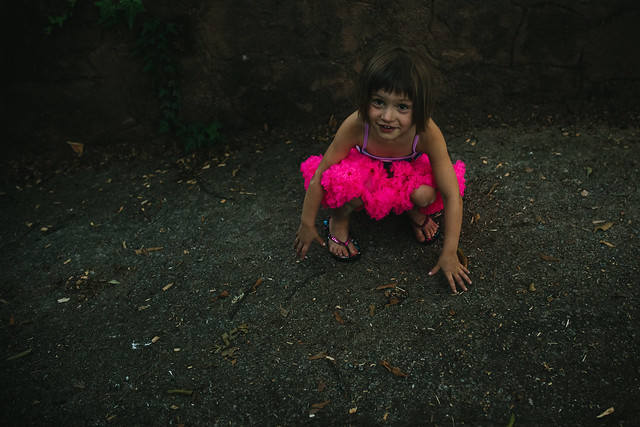 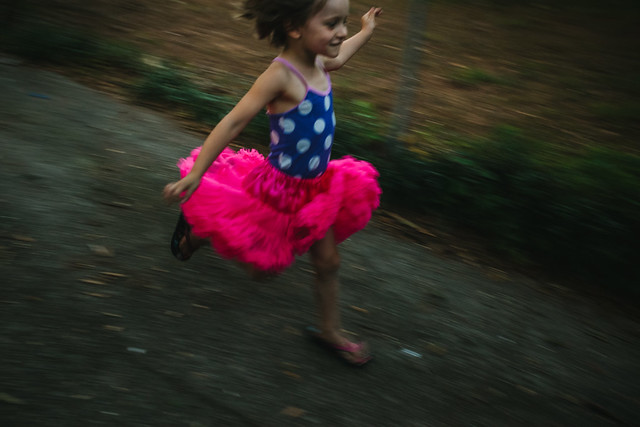 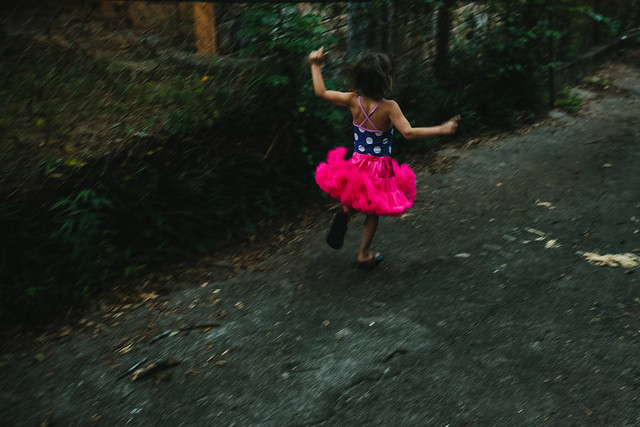 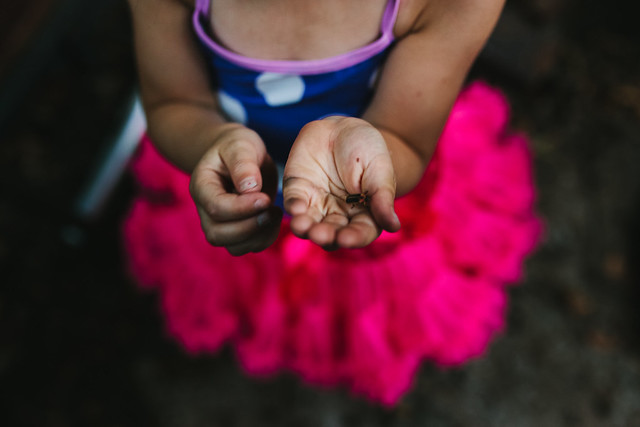